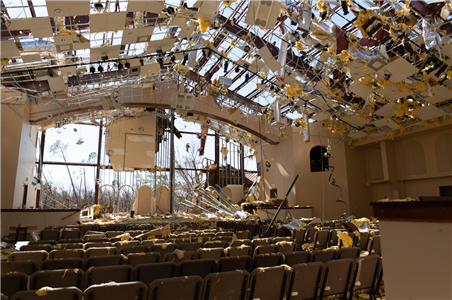 (Linda Bloom with UMNS) - United Methodists in North Carolina and Alabama-West Florida are undertaking large-scale recovery programs for those affected by U.S. hurricanes in 2018, with assistance from the United Methodist Committee on Relief.

The $4.6 million grant for the Alabama-West Florida Conference will help launch and fund the first two years of a phased four-year recovery program in response to Hurricane Michael.

Greg Ellis, UMCOR project manager for the grant, called it “by far the biggest program in recent memory that this conference has done.”

Both grants were part of some $27.6 million in funds authorized April 11 by UMCOR’s board of directors for U.S. and international disaster response, sustainable development and global migration projects, and support for denominational hospitals and health boards through the Global Health unit.

While the Alabama-West Florida Conference has suffered through significant tornados and floods in the past, “they do have some new players that hadn’t managed at that level,” said Catherine G. Earl, UMCOR’s director of disaster response and U.S. partner relations. But they are leaning into those responsibilities “extraordinarily well,” she added.

“In disaster ministry, the conferences have to go from zero to 60 very quickly,” Earl explained. Along with resources, UMCOR provides guidance and flexibility from its own disaster recovery experience, so “we’re able to provide that sense of comfort to them.”

Hurricane Michael swept across a narrow band of the Florida panhandle on Oct. 12, leaving total destruction in some areas. Six of the 12 counties that are FEMA-eligible are in the Alabama-West Florida Conference, which has received additional support from the North Alabama and Florida conferences. Alabama-West Florida also will receive a separate $180,000 UMCOR grant for church repair.

In North Carolina, Ellis said, United Methodists are working in partnership with FEMA through a relatively new STEP (Sanitary, Temporary, Essential Power) program. FEMA assists with purchase of materials and then volunteers, like United Methodists or other religious groups, pick up the materials and perform the actual construction work.

“It really stretches their budgets and it also is a great benefit to the survivor because that money doesn’t count against the household’s allowances,” Ellis explained.

Earl agreed the program is an added benefit. “The intention is to fast-track families and get them back into a livable situation,” she said.

The STEP program setup allows for “sheltering in place” by providing running water, electricity, bedrooms for sleeping “and a way to secure the envelope so no further damage happens” while the house awaits further renovations.

The North Carolina Conference’s project goal is to help at least 1,020 families impacted by Hurricane Florence or Hurricane Matthew in 2016 into full recovery. An estimated 720 will be assisted through the STEP program and 300 through UMCOR funds, Ellis said.

The Mississippi Conference also will receive $2.4 million from UMCOR to assist with recovery from multiple disasters in 2018-19, along with $854,660 to create a management team to undergird its UMCOR recovery projects. Since 2002, Mississippi has had 25 FEMA-recognized major disasters.

A $250,000 international disaster grant will go to International Orthodox Christian Charities to provide shelter support for Syrian refugees and vulnerable Jordanians in Jordan. United Methodists in the North Katanga and Central Congo areas also will receive $100,000 and $93,907, respectively for disaster management.

The historic Cambine Mission agriculture station in Mozambique will receive nearly $200,000 to scale up production, market access and farmer field school programming. SILOE, a development organization of the United Methodist Church in Côte d’Ivoire, has two grants — one for $97,083 for a WASH project and another, for $200,693, for a cassava-growing project.

Beyond Borders, an UMCOR partner in Haiti, will receive $100,000 to increase food production and family security in three villages on Lagonav. A $90,188 grant to the South Congo Zambia Episcopal Area will establish a community agricultural program and farmer field school in the Lubumbashi region. The Tanzania Provisional Conference will receive nearly $98,000 for a village savings and loan project.

The Church’s Auxiliary for Social Action, a longtime UMCOR partner in India, also will receive two sustainable development grants — $141,594 to address the issue of farmer suicide and recovery and $300,000 to undergird its core programming.

As part of The UMCOR emphasis on global migration, Church World Service will receive nearly $140,000 to assist Syrian and other refugees in Europe who are stopped at the border of Bosnia. A $150,000 grant to the UMCOR Sudan office will help build a permanent classroom structure for children in Al Nimir Refugee Camp in East Darfur.

Twelve Global Health grants were approved for United Methodist-related hospitals and health boards. The largest grant of $1.06 million will go to the Zimbabwe Episcopal Area Health Board to enhance access to and the quality of health care in that African country, with a $625,425 grant to Mary Johnston Hospital in the Philippines to rehabilitate the operating and delivery suites.

Bloom is the assistant news editor for United Methodist News Service and is based in New York.