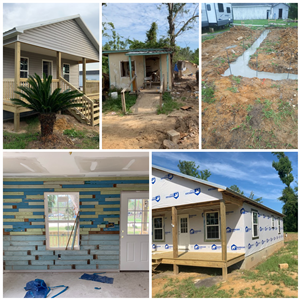 (Kari Barlow for the AWFUMC) - Business owners in the Marianna area have joined forces to make home ownership a reality for several families displaced by Hurricane Michael.

“In Marianna, we are up to 11 brand-new houses,” said the Rev. Chris Ackerman, director of Hurricane Michael Recovery for the AWFUMC. “It’s been a really awesome opportunity.”

The building effort—which targeted uninsured and under-insured residents—is one small piece of the long-term recovery program made possible by the United Methodist Committee on Relief’s $4.6 million grant awarded to the Alabama-West Florida United Methodist Conference in 2019. The recovery fund was launched in direct response to Hurricane Michael, a category 5 storm that caused an estimated $25 billion in damages across Northwest Florida.

Ackerman said the program’s success in Marianna is largely due to the determination and ingenuity of Al Gilbertson, the team’s construction coordinator who’s “got a huge heart.”

“What he did was he went around the Marianna area and he started reaching out to all the contractors—the plumbing contractors, electrical contractors, framers, all of that—and he basically talked all of them into providing their services at cost,” Ackerman said. “And he was able to talk them into it because they wanted to help their community. That’s the beautiful story!”

Gilbertson, a retired city cop and highway patrolmen had just retired to Marianna when the hurricane struck, and afterward he saw the devastation and eventually was hired by the conference to work on recovery.

“People are willing to help if you just ask,” he said. “I was a nobody who knew nobody, and I just went door-to-door and asked. … I don’t want to hear from people that it can’t be done. It can be.”

Gilbertson made it clear to the businesses that his and Ackerman’s primary goal was to stretch their dollars to help as many people as possible.

“I never asked for anything for free,” he said. “Profit is not a dirty word.”

“If another hurricane comes through, I know that roof isn’t going anywhere,” Gilbertson added.

Ackerman agreed and said the quality of the work provided by the businesses has surpassed all of his expectations. Ultimately, each of the houses was built for $50,000 to $60,000.

“It’s a testament to small-town communities where people know their neighbors and living in their community means something to them,” he said. “And the houses we’re building will be able to be handed down to the next generation or sold to the next family.”

The final six of the 11 Marianna houses—which were built on the residents’ original properties— are on track to be finished by the end of May. They are among a total of 40 new houses built by the recovery program across the affected area including Gulf, Jackson and Bay counties.

“Scripture talks about us all being part of the body and it takes all of those pieces coming together to function,” Ackerman said. “Seeing God bring all those pieces together is really powerful. … It’s God working through everyday people. It’s God using everybody.”

As for Gilbertson, he doesn’t want to stop.

“I wish I had a couple million dollars more because I’d like to build about seven more homes. … There are still thousands of people in need.”