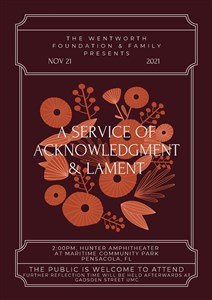 (Pensacola News-Journal) - Last year the public learned that the namesake of the now-former T.T. Wentworth Jr. Florida State Museum was a leader of the Ku Klux Klan during the 1920s. Now, Wentworth's family and the Wentworth Historical Foundation are joining with local clergy to hold a public service of acknowledgment and lament over Wentworth's role in the KKK. Sharon Yancey, the last president of the Wentworth Foundation, told the News Journal the Wentworth family is inviting the Pensacola community to receive their acknowledgment of the injuries that might have happened in the past as detailed in the Wentworth report released earlier this year. More here.

On Thursday, July 8, 2021 the Alabama-West Florida Conference of the United Methodist Church offered this response to the initial reports.