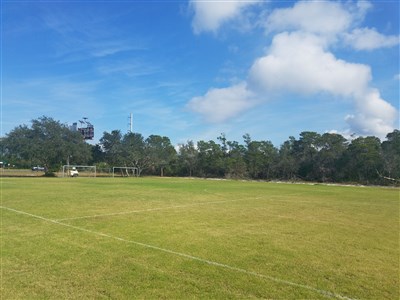 (Kari Barlow for AWFUMC) - Saint Paul United Methodist Church in Gulf Breeze wasn’t looking to add a soccer field to its property on U.S. Highway 98, but God apparently had other ideas.

“How it started was I just answered the phone one day—you know how it goes,” says Rev. Christina Shaver. “It was the coach, Victor Ayala, … of the Gulf Breeze Breakers, which is a club soccer team.”

Ayala explained that his club for 9 year olds to 14 year olds had recently lost access to its practice field and asked if Saint Paul’s would allow his organization to use one of church’s vacant fields. He told Shaver the Breakers would make all the necessary improvements in return for the use. She immediately liked the idea and agreed to put it before the church council.

“We weren’t using that piece of our property,” adds Shaver, who has served at Saint Paul since 2016. “It was a flat piece of property that was dirt and patches of grass. It looked awful. … Someone says, ‘Can we come fix up your property and use it every day?’ and I said, ‘Yes, you can!”

The partnership became official in the spring, and Ayala began making improvements to the field in late April.

“It was really crazy because when they hydro-seed it, it’s bright blue, and our field was bright blue for a couple of days!” Shaver recalls. “It was funny.”

The soccer club also installed irrigation on the lot, two goals and a small shed to hold equipment. By the first week in November, the Breakers started practicing.

“It feels like we have our own home again,” Ayala says. “God put the church in our way, and the church opened their doors to us.”

Ayala, who grew up in Puerto Rico, started the Breakers because he has seen soccer and other sports make a positive difference in the lives of children.

“Sports kept me out of drugs,” he adds. “Sports kept me focused. I had somewhere to go after school. … There’s the camaraderie. You learn people skills, and you learn to work hard.”

For Shaver and the rest of the Saint Paul family, it’s nice to see the kids on the soccer field in the evenings.

“It was such a great thing to be part of,” she says, adding that she’s hoping to start a recreational soccer league in the summer. “We have enough property to where we’re hoping to be able to fundraise and even build more soccer fields and be a place that could host tournaments or larger, outdoor events.”
News