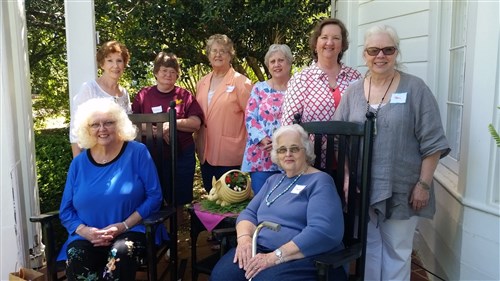 (Kari C. Barlow for AWFUMC) - More than seven months after Hurricane Michael toppled countless trees around Grace United Methodist Church and peeled back the corners of its metal roof, the tiny church continues to struggle.

Most of the trees have been cleared, but every member of the congregation had damage from the massive storm, and many were displaced indefinitely.

“Some of the individuals were in a retirement home, and the retirement home’s roof was destroyed, and they’ve all been sent to other locations,” said Birdie Perkins, treasurer at Grace UMC. “We’re very small and we’ve lost seven people. We’re down to, like, 15 on a good Sunday.”

Grace UMC is one 28 churches across the Alabama-West Florida Conference damaged by Hurricane Michael and still grappling with long-term recovery. To aid in that process, the   conference is helping churches outside the disaster area form partnerships with congregations in recovery.

“When you live in a disaster area, the reminders are constantly there — broken trees, debris everywhere, tarped roofs,” said Susan Hunt, director of mission and advocacy for the AWFUMC.  “Those reminders can sap your energy, cause discouragement, and make the recovery that much harder. Through the partnerships, the members affected by the storm are reminded that they’re not alone or forgotten.”

Hunt said the support can take many forms, but the goal is to lift spirits and offer hope to keep going.

“We can do so much more together than we can as isolated congregations or as individuals,” she said. “We come together for each other in times celebration as well as times of tragedy and disaster.”

Grace UMC found a partner in FUMC Eufaula, which sits about two hours due north of Marianna. Cathie Wilbourne, a long-time member at FUMC Eufaula, said she and many others in her Sunday school class jumped at the chance to offer their support.

“We knew there was a lot of destruction,” she said. “We want to be ongoing partners and to be helpful in any way we can.”

Their first effort was to let Grace UMC know that FUMC Eufaula was praying for its continued recovery.

“Their prayers—that meant more than anything,” Perkins said. “There are still a lot of people in need.”

“It was wonderful,” Perkins said. “They were so gracious, and it was very personal.”

FUMC Eufaula has plans to send a adults and youth to help some of Grace UMC’s members demolish a damaged shed.

“We also have a person here who is willing to go down and fill their pulpit one weekend,” Wilbourne said. “It’s just a matter of scheduling.”

Thus far, 25 of the 28 churches have agreed to having a partner, and 10 of those 25 have at least one partner. Another 15 — mostly small, rural congregations — still need partners.

Wilbourne and Perkins said the partnership between their congregations has shown them that God is very much at work in the area’s ongoing hurricane recovery.

“Mission doesn’t have to be far away,” Wilbourne said. “We have people in our own backyard who are struggling after events that were out of their control, and we want to be of help.”

For Perkins and many others, simply being in touch with FUMC Eufaula helped them feel less alone.

“It was a godsend, to me, that they were interested in connecting with us,” Perkins said. “I feel like if we had a real issue, we could call.”

WANT TO HELP?
To participate in a Disaster Recovery Partnership, contact Susan Hunt, director of mission and advocacy, at susan@awfumc.org.
News