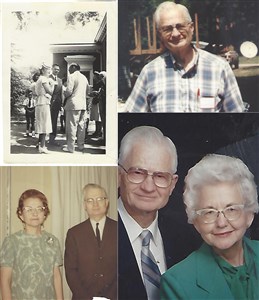 (Kari Barlow for AWFUMC) - On a summer evening in Grove Hill, Alabama, in the early 1930s, a 12-year-old Ray Whatley answered the call to pastoral ministry and never looked back.

He and his younger brother, Billy, had walked seven miles from their home to a revival being conducted at Grove Hill Methodist Episcopal Church.

“Both of us went to the altar,” Billy recalled. “He committed himself to the pastoral ministry and me to accept Christ as my savior. As far as I know, Ray never had second thoughts about his decision.”

In the years that followed, Ray went on to lead a fiercely principled life, taking stands on civil rights issues that would ultimately derail his career as a church pastor but place in him in a position to help transform the United Methodist Church’s pension program. Along the way, he married Katherine Green of Conway, Arkansas, and they adopted a son, David. After Ray retired from the UMC in 1981, he and Katherine settled in the Lake Junaluska community near Asheville, North Carolina.

Today, almost nine decades after answering the Lord’s call, Ray is turning 100 and being recognized as the oldest living pastor in the Alabama-West Florida Conference. Katherine died in 2012, but Ray still makes his home in Asheville—now in a UMC retirement center—and his family and friends are planning a big celebration at Lake Junaluska the weekend before his birthday, which is Oct. 16.

‘Ahead of his time’

Dr. Herb Sadler, who is Ray’s nephew and a retired pastor from the AWF Conference, fondly remembered his uncle as a pretty straight arrow.

“He was kind of straitlaced,” Sadler said. “He always wore a white shirt and tie everywhere for everything. … He was very precise, and he was great at administration.”

Sadler was never surprised by his uncle’s enduring service to the UMC. After all, their family comes from a long line of Methodist preachers dating back seven generations to the 1790s. Ray was licensed to preach in 1939, only one year after graduating from Clark County High School in Grove Hill. After earning his degree from Huntington College in 1945 and receiving his full connection in the UMC, he continued on to pastor several congregations across Northwest Florida and Southeast Alabama.

It was while pastoring St. Mark Methodist Church in Montgomery—at the time of the 1955 Montgomery bus boycott— that Ray’s understanding of God stood at odds with mainstream Southern culture. He served as president of the Montgomery Council on Human Relations, alongside Vice President Martin Luther King Jr., working to find a solution that would work for all involved.

“He was preaching that we were all God’s children and deserve respect,” David said. “When I talk to Dad now, he thought he did the right thing, taking the positions he did on racial issues, but it was hard on him and my mother. But he wouldn’t change it.”

Before long, Ray was labeled a liberal and a radical and transferred to a series of small country churches that didn’t particularly want a pastor of his reputation.

Sadler described his uncle as a pastor who was always “ahead of his time” and a “prophet” who was unafraid to tell the South how it needed to change.

“A few years ago, when he was in his early 90s, he spoke on the floor of the Annual Conference for full inclusion of gays and lesbians,” he said. “At that time, it was shocking!”

After leaving the pulpit altogether, Ray took a position with the UMC General Board of Pension where he played a critical role in convincing church leaders to fund their pension program.

David said his father has told him that he’s most proud of the work he accomplished at the Board of Pension.

“He’s a pastor, and he wanted pastors who devote their lives to the church to be taken care of,” he said. “He fought many battles.”

Sadler agreed, adding that the most important lesson he learned from his uncle was courage.

“He was always a man of principles,” he said. “The moral integrity he showed was his greatest gift to me.”
News