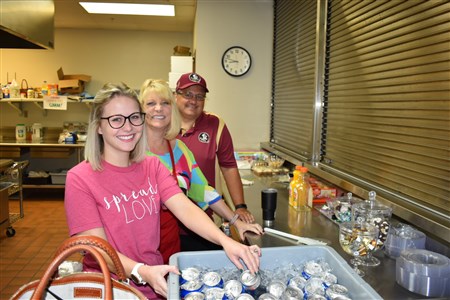 (Kari Barlow for AWF Conference) - Lynn Haven United Methodist Church has launched a new ministry to support the men and women in its congregation who have stepped up to care for the most vulnerable children in Bay County and beyond.

Nest Builders—the brainchild of Katie Fanning, director of missions at Lynn Haven UMC—targets foster and adoptive parents with the goal of surrounding these special families with hands-on love and encouragement.

“We really wanted people to know they are not alone,” she says. “Parenting is unique when you’re parenting children from hard places. … Children who are coming into foster care, it’s so traumatic.”

Fanning and church member Lisa Boyce began developing Nest Builders after the church hosted a weekend retreat in September 2017 for foster and adoptive families, which drew about 20 people from the local area. In addition to planning a second retreat for this September, they are also forming care teams of six to eight people who will be matched with a foster or adoptive family in need of support. Those team members might provide anything from nightly meals and mentoring to clothes donations or assistance with transportation.

The idea is for the church to help make those families’ lives a little less overwhelming, which, for fostering, can be critical to longevity.

“When foster families have a care team, they tend to foster way longer,” Fanning adds.

For church members Kristen and Mason Faggert—who have two biological sons, ages 11 and 9, and two foster children, ages 4 and 1—the idea of a dedicated care team is exciting.

“When you sign up to foster, you can’t do it alone!” says Kristen, who also works as a veterinarian. “Our church family has been a huge support. It’s such a blessing to have those people.”

She has also been amazed by God’s faithfulness since they started fostering almost two years ago. One of their first foster children was a 5-year-old girl who had only the tattered clothes on her back, but because the Faggerts have two boys, they needed pretty much everything.

“The one pair of underwear she had on had so many holes, I don’t even know how it stayed on her body,” Kristen recalls. “And I never told that need to anyone, and then Katie Fanning brought me a bag that first day, brought it to work, and when I opened it up, I just boo-hooed because there was a package of underwear!”

It was a small thing, but it spoke volumes to Kristen.

“It was amazing,” she says. “God was just showing us that he was there, and he was going to provide!”

“You get frustration and sadness, but you also get joy,” Kristen says. “There’s up and downs.”

As an adoptive parent herself, Fanning knows the challenges that come with opening your heart and your home to a child whose start in life has been rocky. She also knows the relief of having a supportive church family. She and her husband, Tom—who also have a biological daughter, 9-year-old Bethany—adopted their son, Caleb, from China in 2011. He had lived in an orphanage and was almost 2 years old when they brought him home.

“Our son has a cleft lip and palate, and so every time he has a surgery, it’s great because we don’t have to cook meals for several weeks,” she says. “And a year ago when he had surgery, all the kids at church made him cards.”

Fanning wants Nest Builders to provide that same kind of safety net to other adoptive and foster families within the congregation and eventually in the surrounding community. She believes the ministry is firmly rooted in scripture, particularly Matthew 18:5 where Jesus says, “And whoever welcomes one such child in my name welcomes me.”

“Just love big,” she says. “That’s what God calls us to do. We’re never sure. You just do it out of obedience and love.”