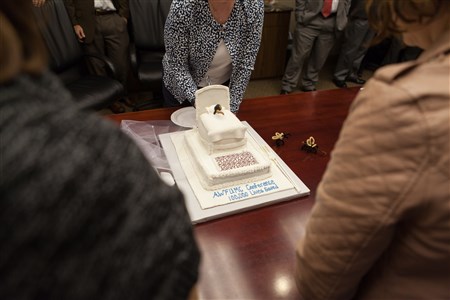 Montgomery, AL - The Alabama-West Florida Conference of The United Methodist Church has reached its goal of saving more than 100,000 lives, thus raising over one million dollars for Imagine No Malaria.

The initiative was a grass-roots effort of the eight districts. Each district formed a leadership team to create accountability and coordinate various events. Many teams met monthly to organize the churches in their districts. Several districts chose to focus their efforts around the Lenten season and asked congregations to fast, therefore donating the money they would have spent dining out to Imagine No Malaria. Children’s lemonade stands, offerings from Vacation Bible School, basketball free-throw contests and special offerings, to name a few, were all generated on the local church and district levels.

“The Alabama-West Florida Conference has placed a priority on helping to eliminate malaria in Africa. I am thankful for the leadership of our district superintendents and lay leaders who challenged our churches to deepen their missional giving and engage with our entire connection for this worthwhile partnership. It was humbling to see United Methodists of all ages participate in this challenge of saving 100,000 lives,” said Bishop Paul L. Leeland. “We celebrate reaching this milestone and give thanks to God that our denomination places an emphasis on helping those in areas of the World that need it most.”

The AWF Cabinet and conference staff held a celebration on Wednesday, January 27, 2016. Kim Bullard, a long-time United Methodist member in Montgomery, prepared a stunning cake representing a young girl sleeping comfortably in a bed surrounded by a bed net. Bishop Leeland expressed his thanks to this leadership group for the global impact they had by reaching this goal. Click here to see photos from the celebration. Other celebrations will be held in the eight districts and at 2016 Annual Conference.

Imagine No Malaria, an initiative of people of The United Methodist Church, is a comprehensive effort that includes prevention and treatment of malaria. It is part of a global partnership to eliminate this disease.
News