Live in Peace Together 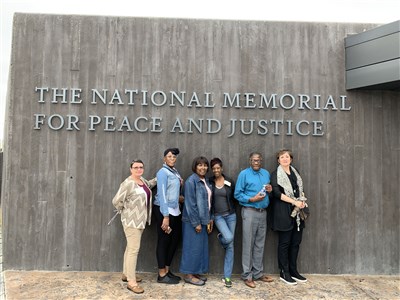 (Kari Barlow for AWFUMC) - Edith Brooks thought she was planning a simple trip to the National Memorial for Peace and Justice in Montgomery for a few of her fellow United Methodist Women members in the Bay Pines District.

Before long, prayers were answered, Christians of different races had joined hands and conference funds were secured, resulting in an all-out pilgrimage—via charter bus, cars and vans—to Alabama’s capital city to confront the truth of America’s history regarding slavery and racism.

“Certainly, his hand was in it,” said Brooks, who is a member of Morgan’s Chapel UMC in Bon Secour. “There was no doubt about that.”

The group of roughly 80 people gathered at River City UMC on Oct. 21—coming from as far away as Gulf Shores and Eclectic as well as Peachtree City, Georgia—for a formal sending forth that included prayers for healing and wisdom and enlightenment. Then they visited both the Legacy Museum on Coosa Street, which sits on a space where enslaved people were once warehoused, and the lynching memorial on Caroline Street.

“It was meaningful to me to have the background before I went to the memorial,” Brooks said. “You see some of the very trivial reasons or lies that led to so many people being lynched. … It is hard to soak in and it is hard to listen to.”

The memorial is the first in the United States dedicated to the legacy of enslaved blacks, blacks who were terrorized by lynching, those oppressed by racial segregation and present-day people of color who are forced to live their lives burdened with presumptions of guilt and violence.

The six-acre site, which blends sculpture, art and design, includes more than 800 6-foot monuments, one for each U.S. county where a lynching took place. The names of the victims are engraved on the columns.

After the visit, the UMW group returned to River City UMC for reflection.

“We talked about what we had learned and what we were going to do in response,” Brooks said. “We are committed to following through with that.”

The many different responses were encouraging and ranged from changing personal attitudes and behavior to starting book clubs, working to abolish the death penalty and serving the incarcerated, she added.

“We ended with communion, and we did it by intinction, so there was the image of one cup and one body,” she said.

Brooks said the best part about the pilgrimage was God bringing together black and white Christians from different walks of life to visit the memorial together. She was especially thankful for the spiritual guidance of the Rev. John Brooks and his wife, Reda, in planning the trip, Annette Winston for leading the post-visit reflection and the hospitality of Pastor Justin Todd and his staff at River City UMC.

“I was so thankful that we did have that participation,” she said. “This is what God wants from us. He wants us to love one another, be kind to one another and live in peace together.”
News