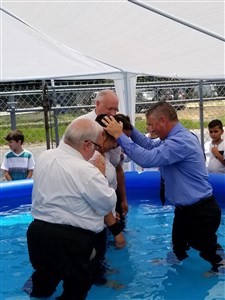 The growing congregation was recently presented with the property and buildings that sit adjacent to its current sanctuary at 1302 N. Pace Boulevard. The roughly half-acre lot was donated by the Pensacola District Board of Methodist Missions/Church Development—a nonprofit dedicated to purchasing land for the purpose of creating churches.

“God has a huge plan through our UMC, our Conference,” said Casa de Dios Pastor Andres Doimeadios, who has led the district’s UMC Hispanic Ministry since 2011. “The Board of Methodist Missions in the Pensacola District has ears to hear and a ready heart to help make disciples of Jesus Christ. In a year, two donations were made to Casa de Dios Gateway of Heaven to further God’s Kingdom! Amen.”

In June 2017, the District Board purchased the Pace Boulevard property where Casa de Dios is currently located and deeded it over to the church. Since then, church members have refurbished the space themselves, creating a sanctuary and offices. But with Sunday attendance as high as 120, the congregation soon found itself short on space. About three months ago, Doimeadios went to the District Board with a proposal to borrow money to purchase the adjacent lot.

In keeping with its mission, the District Board purchased the lot for $63,000 and deeded it over to Casa de Dios along with $15,000 for renovations. District Board President Duane Keck said the board saw Casa de Dios’ growth and was touched by Doimeadios’ sincerity and his desire to share God with the people in that community.

Keck and other board members were able to worship with Doimeadios and the Casa de Dios family on June 24 when the property donation was announced. Bishop David Graves preached, and the congregation celebrated multiple baptisms in the church parking lot.

The two new buildings—one of which will be used for a new and larger sanctuary—will require major repairs on the roof, walls and flooring, but Casa de Dios members will once again chip in to do as much of the work as possible.

“It’s God’s work. Brick and mortar are just that,” Keck said. “The ministry is what’s inside. It’s the people’s hearts. … That’s why they are growing like they are!”
News