'It was always important' 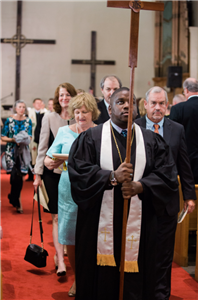 “It’s a beautiful old church with beautiful stained-glass windows and a really, really tall steeple with a big cross on top of it,” she said. “I just love having that be what I look at.”

On Thursday, she happily joined family and friends inside that beloved sanctuary for a special service celebrating her recent appointment as well as the appointment of Associate Justice Will Sellers. Gov. Kay Ivey appointed Stuart in late April following the resignation of former Chief Justice Roy Moore. Ivey tapped Sellers to serve in the open associate justice seat held by Stuart.

The service, planned by Rev. Jay Cooper, pastor of FUMC of Bay Minette and Stuart’s home congregation, drew dignitaries and local officials from across Alabama.

“There is something special about being able to stand here and gather at midday as a congregation of believers for worship and the sacrament of Holy Communion,” Cooper told the congregation. Several UMC clergy from the Montgomery area—Rev. Virginia Kagoro of River City UMC, Dr. Larry Bryars of Frazer Memorial UMC, Dr. Lester Spencer of Saint James UMC and Rev. Richard Williams and Dr. Brian Miller of Aldersgate UMC—also participated, serving communion and offering prayers.

For Stuart, that connection to other Christians is a blessing that has shaped her entire life. The Atmore native, who was raised Presbyterian, can’t remember a time when church was not a significant part of her life. “I came from a family where we were at church every time the doors were open,” she recalled. “It was always important.” Stuart joined the UMC in 1984 when she and her husband, George, settled at FUMC of Bay Minette. More than 30 years later, they remain active members. In fact, Stuart still teaches the same adult Sunday school class that she started in 1985. “We’ve aged together! It started as a young adult class,” she said. “They are my closest friends and they are like family. … We pray for each other all the time.” One of her greatest joys is cooking Wednesday night church dinners, which she does with a team of volunteers on a rotating basis. “It’s very rewarding to me,” said Stuart, whose popular dishes include chicken divan, roasted tomato soup and grilled pork tenderloin. “I think that’s a gift I have, and it’s a gift I use to benefit the church.”

Staying connected to church family is one of the many ways she keeps her busy life on an even keel. “You have to work at keeping things in balance,” said Stuart, who also enjoys “playing in the dirt” but laments not having a green thumb. “I do acknowledge that I am a bit of a workaholic, so I have to save time for other things.” When she is at work—leading the judicial branch of Alabama state government—Stuart doesn’t hesitate to turn to God for guidance. “In my court, we always pray before we meet, and we take turns praying,” she said. “… I always pray that God will give us wisdom and discernment to make the right decisions.”

Read more of our conversation with Chief Justice Lyn Stuart:

Q: Did you always want to be a lawyer and a judge?
A: No, neither! I wanted to be a juvenile probation officer, and I knew that from the time I was, probably, early high school. That’s really what I studied to do. I actually have a double major from Auburn in sociology and education. … I just wanted to work with young people, and I thought juvenile probation was the way to do it. But there were very, very few opportunities in the state of Alabama. It was just not realistic that I would be able to get that job. So I took the LSAT, the law school admission exam, pretty much on a lark and did well on it. I applied to law school and was admitted to both Alabama and Cumberland, and Alabama gave me a small scholarship.

Q: What’s the most challenging thing about being a judge?
A: The most challenging part is trying to keep your personal feelings separate from trying to make decisions based purely on the law and the facts. That’s just something you have to do. It’s something you have to do from the beginning. It’s a given, a requirement. If you can’t do that, then it’s really not the job for you.

Q: What’s it like campaigning for an elected judgeship?
A: It’s interesting. Alabama is a really big state, but it’s a beautiful state and it has wonderful people. And that’s the part I really like about (campaigning)—getting to see the state and meet all the people.

Q: What advice do you have for young women?
A: I say this often when I speak to young women. I truly believe that you can do anything that you want to do with God’s help, as long as it’s part of his plan. … And that requires a lot of prayer!

Q: How long have you been married and where did you meet your husband, George?
A: 36 years. I had already finished law school, and I met him in Gulf Shores at a Fourth of July party his parents were giving. His parents and my parents had been friends for years and sort of lost contact and then re-established contact. I was studying for the bar exam and should have never been at that party!