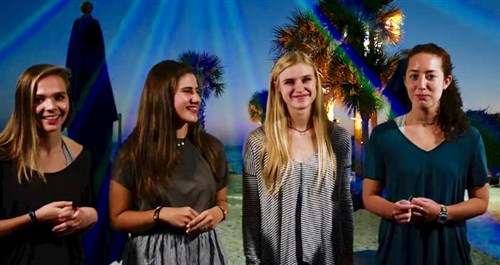 (Kari Barlow for the Alabama-West Florida Conference) - When high school homecoming dances end, most teenagers are nowhere near ready to call it a night. In Gulf Breeze, there’s a tradition of partying hard in beachfront houses flowing with alcohol and a wide variety of recreational drugs.

But for the past four years, high school students active in the Gulf Breeze United Methodist Church youth group have led the fight for a safer alternative. Serving on a planning committee with other church members, they put together an alcohol-free night of fun, food and fellowship that has become one of the hottest tickets in town.

“Kids are going to go somewhere after the homecoming game,” says the Rev. Shawn York, executive pastor at Gulf Breeze UMC. “All we’ve done is make it cool to be sober.”

This year’s homecoming after-party— recently rescheduled to Oct. 21 because of Hurricane Nate—will be held in the outdoor dining area at Flounder’s Chowder House on Pensacola Beach. The theme is “Glo Up!” and guests can expect all manner of glow-in-the-dark festivities.

“At the tiki hut, the bartenders will be serving mocktails,” York said. “And we’ve chartered the dolphin cruise boat … to take them on a cruise under the stars.”

The party, which runs from 9 p.m. to 1 a.m., will also feature a DJ and a photo booth. The Escambia County Sheriff’s Office provides off-duty security, and parents chaperone in shifts.

In response to the annual party’s growing popularity, this year Gulf Breeze UMC expanded the planning committee to include seniors from St. Ann’s Catholic Church, which is also located in Gulf Breeze.

“It has proven to us that the majority of our students want something better than the world is giving them,” York said. “They are definitely future leaders, and they’ve really taken ownership of this.”

To fund a party like “Glo Up!” takes money, but York says parents and church members always come through with donations. He estimates this year’s event will cost about $7,000, but maintains it’s well worth it to keep teenagers safe.

“I am hoping other churches will be able to look at what we are doing as a model,” York said.

For more information about the annual event, contact York at syork@gbumc.org. Photo courtesy of GBUMC and includes the high school leadership team that helped plan the event.