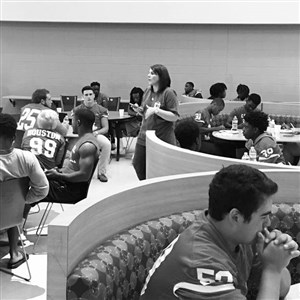 (Kari Barlow for the Alabama-West Florida Conference) On Friday afternoons during high school football season, the folks at First United Methodist Church of Marianna don’t have a lot of time to stand around and chat.

They’re too busy cooking up baked chicken, barbecue pork or some other hearty fare for the Marianna High School Bulldogs. And while feeding dozens of hungry varsity and junior varsity football players before each game is hard work, the church wouldn’t have it any other way.

“It’s a big ministry here,” said Dr. Nathan Attwood, senior pastor at the church. “On game nights, we have church members who have decorated the tables with purple and gold. … Sometimes we have motivational speakers, and we always pray for the team.”

“There’s a real feeling in our church that we are missionaries to our young people,” said Attwood, who’s a regular at home games. “It’s a great outreach.”

FUMC Marianna is one of many congregations across the Alabama-West Florida Conference taking a more active role in their local high school football scene. From Prattville to Pensacola—particularly in those small towns where a single high school unites the entire community—United Methodist pastors and church members are using their time, talents, money and straight-up love of the gridiron to minister to players, coaches and their families.

“I love high school football,” said Rev. Jay Cooper, pastor of Bay Minette FUMC. “It’s like the one time our community comes together. On Sunday mornings, we’re so separated. … A game is the one time everyone is one place and pulling in the same direction.”

Cooper, who played football and soccer in his younger days, holds season tickets to the Baldwin County High School Tigers’ home games and supports the team on the road when possible. He’s also been known to brave the BCHS pep rallies to cheer on the football players and marching band and dance team members connected to the congregation.

Cooper noticed the bond between the church and the football program back in the fall of 2015, a few months after arriving in Bay Minette. During a home game, a Baldwin player took a hard hit after catching a pass and was knocked unconscious. As the stadium fell silent with worry, a woman walked over to Cooper and asked if he would pray for the young man.

“I agreed, not knowing she meant over the loudspeaker,” he recalled. “But I followed her to the booth, assumed the microphone, and asked everyone in the stadium to pray with me, which many were already doing in groups all over the stands.”

Later that night, Cooper visited with the injured player, who went on to a full recovery.

“None of this would have happened had the lines of communication not been open and a relationship established,” he said. “The community trusts those who invest in its young people.”

Like its counterpart in Marianna, Bay Minette FUMC also makes sure its players, coaches and cheerleaders are well fed, providing them with a full breakfast at the church on the morning of every home game.

“You just open your doors and feed them and love them,” said Cooper, who delivers a brief devotional to the students after the meal. “What I can give them that is gospel is that they are never beyond the reach of God’s love. That God really wants to be part of their lives.”

The church’s efforts have brought more young people—friends of church members and those simply connected through the team breakfast— into the church, particularly its Wednesday night youth program.

“I think they feel welcome and they know we care about them,” Cooper said. “A lot of the players will see me at Wal-Mart or a restaurant or something and they’ll come give me a high-five or a hug. It’s just opened up a door!”

In Ozark, home of the Carroll High School Eagles, local pastors have partnered with the principal, coaches and teachers to support a newly revived Fellowship of Christian Athletes. Bobbi Lassiter, associate pastor at Ozark FUMC, delivered the devotional at the group’s kick-off meeting.

“It was such an honor to be able to set the tone for them,” she said. “I used the story of Peter stepping out of the boat and walking on water and talked about how hard it is to stand up for your faith in high school but how important it is.”

Lassiter said the high school’s football coach and cheerleading coach are members of the congregation and eager to have her involved with the team. She led the prayer for the team’s recent pep rally and scrimmage game and also led the football players and cheerleaders in a joint devotional before a home game.

“I use personal stories in all of my stuff,” said Lassiter, a former softball player. “It’s helped a lot. The students all know me know, and when I see the kids around town, it makes it easier to connect.”

Although Attwood, Cooper and Lassiter live and serve in different communities, they agree that investing in the local high school football program is well worth the effort.

“I consider it a Matthew 25 ministry—when Jesus said feed, clothe, welcome and visit,” Cooper said. “It’s all of that!”