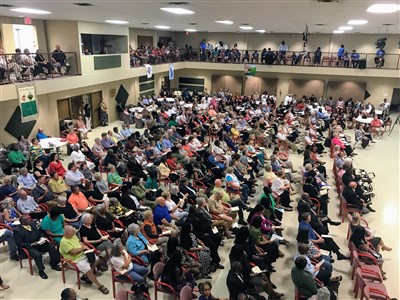 More than 500 people turned out for “Path to Peace: A Reconciliation Celebration” that united blacks, whites and Latinos from across Baldwin County.

“We used every chair that we owned, and there were still people standing up!” said Rev. Dr. Nolan Donald, pastor at Foley UMC. “I would describe it as holy ground.”

The two-hour service, which blended worship, prayer and sermons from all three communities, was organized as a demonstration of racial unity founded on the cause of Christ. There were white choirs, black choirs and a Latino worship team, and afterward officers from the Foley Police Department grilled hamburgers and all the fixings for the crowd.

“It was one of the most beautiful expressions of Christianity I have ever been a part of,” Donald said. “Several of the speakers said when they got on stage it was just a glimpse of heaven.”

The reconciliation service was the culmination of more than six months of planning by roughly 25 churches across the area. Meeting every two weeks, they prayed and shared ideas about how to combat the racial tensions currently plaguing much of the nation. The team, which included Presbyterian, Lutheran, Methodist, Catholic, Pentecostal and non-denominational churches, relied heavily on Facebook and other social media platforms as well as newspapers and radio publicize the event.

“There was definitely some buzz about it,” Donald said, adding that he’d been uncertain about how many folks would show up. The service—which ended with a rousing rendition of “Amazing Grace”—reinforced the idea that people who disagree about politics or social issues can still stand united in Christ. “Despite the way of the world, this myth that we can’t trust each other, there was hope that the world can look different,” he said. “It was a strong declaration of the Gospel—that the other way is Jesus.”

Organizers now hope to create “affinity group”—groups of people who intentionally gather to enjoy a meal or watch a football game. “I think it’s what we’re called to do,” Donald said. “What brings racial reconciliation is not going to big events. … Deep changes will only come with deep relationships.”

Kari C. Barlow is a journalist based in Pensacola, Fla.