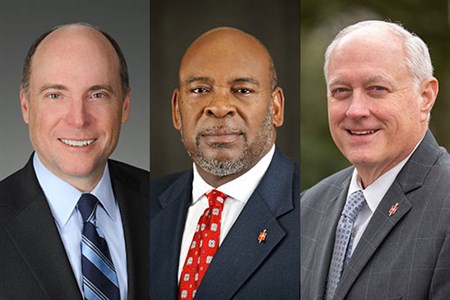 Evans joined Southern Company Gas, formerly AGL Resources, in May 2002. In addition to serving as president and CEO, he held several other leadership positions, including chief operating officer, chief financial officer, and treasurer.

A graduate of Emory University with a bachelor’s degree in economics, Evans is also a graduate of the Booth/Kellogg program and CEO Perspectives. He serves as chairman of the Grady Health Foundation, and on the boards of Zoo Atlanta and United Way of Greater Atlanta – HomeFirst Atlanta Community Oversight Board. Evans also serves on the energy advisory council of the Federal Reserve Bank of Atlanta.

Graves, an ordained pastor in the United Methodist Church for more than 28 years, was appointed resident bishop of the church’s Alabama-West Florida Conference in 2016. Along with his cabinet and the Board of Ordained Ministry, Bishop Graves formed a 19-member Bishop’s Response Team, which stands ready to support congregations across the Alabama-West Florida Conference in times of crisis.

A native of Knoxville, Tennessee, he began his ministry at the Fountain City United Methodist Church in Knoxville, and served churches in the Chattanooga and Kingsport areas, including as senior pastor for the Ooltewah United Methodist Church, a large membership church. He was appointed superintendent for the Kingsport District of the church’s Holston Conference, where he served for six years and was dean of the cabinet.

Graves holds a bachelor’s of business administration degree from the University of Tennessee, Knoxville, and a master of divinity degree from Emory’s Candler School of Theology.

A native of Griffin, Georgia, he has traveled extensively as a specialist in missions to Ecuador, Uganda, Costa Rica, Haiti, Honduras, Guatemala, Zimbabwe, Kenya, India, China, and Hong Kong. He has served the United Methodist Committee on Relief, the Catastrophic Disaster Response Team, and as the Church World Service Disaster Consultant in Georgia.

Holston holds a bachelor’s degree in religion from the University of Georgia, a master of divinity degree from The Interdenominational Theological Center, Gammon Theological Seminary in Atlanta, and several honorary degrees.