Conference Staff off to busy start in 2019 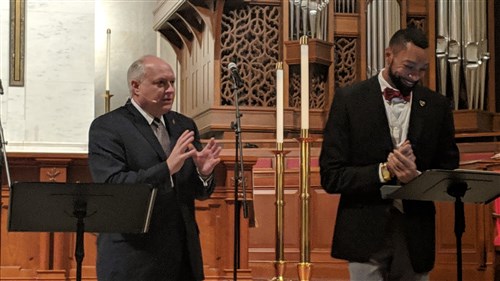 (Kari C. Barlow for AWFUMC) - The Alabama-West Florida Conference staff is ushering in the new year with a renewed focus on its 2018-2020 priorities.

Those four areas—growing discipleship, cultivating exceptional talent, training and teaching and being adaptive leaders through uncharted times—are considered to be pivotal in the challenges and opportunities that lie ahead in the next two years.

“We really wanted to start the year off right,” said Rev. Ashley Davis, director of connectional ministries for the conference.

During the first week of January, Davis, along with Bishop David Graves, Rev. John Russell of St. John UMC in Mobile, Rev Richard Williams of Aldersgate UMC and Dr. Sam Parkes of Mary Esther UMC, attended the 2019 National Festival of Young Preachers in Atlanta. The annual event allows young preachers from across the country to attend master classes on preaching, to connect with mentors from colleges and seminaries and to network with other young people answering the call to full-time ministry.

Graves and Russell preached at the festival’s opening worship service, and the AWFUMC—a partner in the event—set up a booth to welcome and recruit potential clergy members.

“It’s a very ecumenical gathering—there were United Methodists, Lutherans, Presbyterians, Catholics,” Davis said. “It includes young preachers from age 14 to 35. If we’re going to encourage people, they have to start somewhere!”

All of the young preachers who attend have an opportunity to practice preaching—and be evaluated—during the event. Parkes, who holds a doctorate in homiletics, served as one of those evaluators tasked with providing constructive feedback. Russell, who leads a diverse congregation, and Parkes also taught a class on preaching in a multicultural setting.

“I was inspired by the level of preaching,” Davis said. “A lot of the sermons had me on my feet! … And there was a lot of willingness to call out injustice.”

One of her favorite moments came at the end of the festival with a “Gospel Slam” featuring traditional preaching and much more.

The festival is an excellent way to create a “brave space” with a lot of camaraderie for young people who are considering becoming preachers, she added.

“It’s invaluable—especially because of the communities they are forming,” Davis said. “If you’re a 14-year-old or 15-year-old who wants to be a preacher, chances are you’re pretty different … and to be with other young people who are experiencing a call, there’s a lot of encouragement in that.”

The festival has even motivated Davis to explore holding a similar regional festival for young preachers across the Alabama-West Florida conference.

A few days after returning from Atlanta, Davis accompanied members of the conference staff and Huntingdon College to Lakeland, Florida, to meet with Florida Conference staff and the leadership of First UMC Lakeland. Their purpose was to learn about the programs that have helped the FLUMC and First UMC Lakeland create a vibrant culture of the call.

Davis said she was especially impressed with Rev. David McEntire, the senior pastor, and his staff’s commitment to First UMC Lakeland’s strong internship program and efforts to make the vocation of ministry accessible to young people.

“It’s very intentional,” she said. “Young people really get to experience all aspects of ministry.”

“It was a really good time of crossing conference boundaries,” she said. “It was connectional!”

The conference plans to hold a meeting of 10 selected churches on March 2 to officially share what it learned in Lakeland.

“The hope is to do a deep dive with this group and spread it to others,” Davis said. “And one of the hopes is that we can make it possible for more small- and medium-sized churches to have internships.”