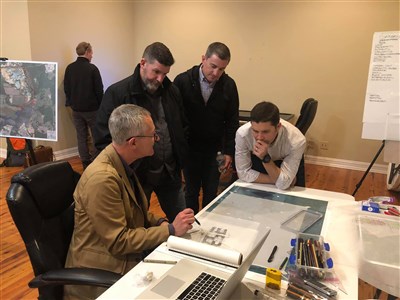 (Kari Barlow for AWFUMC) - Century Church is several steps closer to finalizing the design of its innovative new campus at The Oaks in Pike Road.

“It’s a beautiful piece of land,” said Rev. Patrick Quinn, lead pastor at Century Church. “We have 23 acres the Lord is letting us play on.”

Century Church—originally planted by Frazer UMC in 2016—meets regularly at Pike Road Elementary School. The congregation has grown rapidly since its inception, baptizing almost 80 people growing a membership of 525. It’s also a young church, with an average age of 39 and 85 to 90 children in attendance every Sunday. Early on, Quinn and church members began debating whether they should be portable or permanent, and after much prayer and discussion, they concluded they can do the most good with a permanent campus.

But the Century Church campus will be anything but traditional.

“What we have designed is a piece of property that is for the community first and the church second,” Quinn said. “It’s a totally new way of looking at church planning.”

He said the church hopes to finalize the overall design by March 10. The front of the property will be dedicated to leasing space to businesses, nonprofits and other organizations whose mission falls in line with Century Church’s beliefs. Some of the possibilities include a commissary kitchen, a YMCA branch, a farmer’s market, creative arts studios, business incubators and the United Methodist Children’s Home.

Instead of a traditional church building, the campus will feature The Well, an indoor-outdoor space where people can gather, worship, and enjoy secular and Christian music together.

Quinn, who worked in resort management prior to entering the ministry, said it has long been a dream of his to incorporate the hospitality, community and nature found at the best resorts into the space of the church. He said his own study of Jesus life led him to conclude that such a way of living is well within God’s plan for people.

“It seemed that Jesus had in mind that people would hang out with each other and become family to one another,” he said.

He said the community of Pike Road has been extremely supportive, particularly the school system and the mayor’s office.

“They’re cheering us on and want this church to reach the next generation,” Quinn said. “What we have found is that people are excited about a church that wants to give itself away. … There’s not one building that will be solely for our use. Even down to the office space, we’re looking at having work share possibilities!”

Many details have to be ironed out in the coming months, but church officials hope to break ground on the campus sometime in the fourth quarter of this year.

“I feel like God has had his hands on me to do this kind of ministry,” he said. “Is it stressful? Sure, but this is a vision that’s bigger than me or any one person, and I’m learning to trust God in that.”