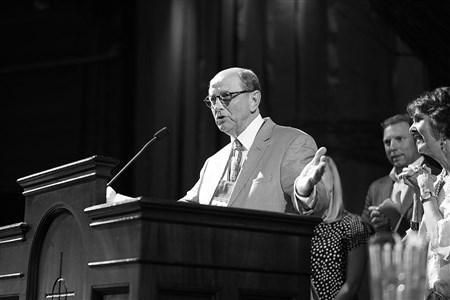 Dr. Robert Lawson Bryan, of the Alabama-West Florida Conference, has been elected a bishop by the Southeastern Jurisdictional Conference of the The United Methodist Church.

He is the fourth bishop elected at the 2016 Southeastern Jurisdictional Conference. Bryan, who serves as senior pastor at Montgomery First United Methodist Church in Montgomery, AL, was elected on a ballot taken at 5:00pm on July 13, 2016. He will fill one of the vacancies created in the denomination’s jurisdictional College of Bishops by the retirement of five bishops.

Bryan will become one of 13 active bishops serving the Episcopal areas of the 15 annual conferences that make up the Southeastern Jurisdiction.

Upon his election, Bryan was honored by members of the Alabama-West Florida Conference delegation and then escorted to the stage by Bishop Paul Leeland and Bishop Larry Goodpaster. His wife, Sherrill, son Philip and daughter-in-law Brittany were in attendance and joined him on stage.

In his remarks to the conference he thanked his family, the Alabama-West Florida Conference and again stressed a word he frequently uses in making an impact in the UMC, “Immediately.” Following the election he stated, "It is an honor to be elected by colleagues in our jurisdiction and to see God at work. For the past year, I have referenced Ephesians 2:5, 'Alive Together in Christ' and ask for your prayers as I seek God's will as a leader in our SEJ Conference."

Endorsed by the Alabama-West Florida Conference, Bryan was elected on the tenth ballot, receiving 256 of the votes cast. He holds a Bachelor of Science from Tulane University and a Doctorate in Ministry from Candler School of Theology at Emory University. His service to the church and community includes:

A United Methodist bishop in the United States is elected for life. Bishops are charged by the church’s Book of Discipline to “lead and oversee the spiritual and temporal affairs” of the church and to “guard, transmit, teach and proclaim, corporately and individually, the apostolic faith as it is expressed in Scripture and tradition, and, as they are led and endowed by the Spirit, to interpret that faith evangelically and prophetically.”