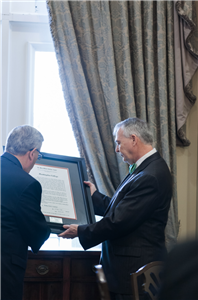 Bishop Paul Leeland was honored on April 29, 2016, by Huntingdon College and President Cam West, at the Montgomery Country Club. Leeland was the recipient of the Mary Mildred Sullivan Award. This award is given to a non-student member of the college community. Huntingdon College is one of several select southern colleges and universities that presents this award. According to the award guidelines, the recipient should possess spiritual qualities such that the “spiritual standard of the institution may be judged by the character of the person to whom the award is made.”

A formal lunch was served and opening remarks were given by President West. He welcomed special guests in attendance including the Bishop’s daughter, Nora Leeland Zarcone, who flew in from North Carolina to honor her father.

Before presenting the award, President West noted personal characteristics of Bishop Leeland explaining that he has forged a partnership in ministry of Christian higher education and that the college celebrates his ministry for the past eight years. He said, “ His relationship (to the college) is the gold standard in the UMC for the intentional embrace of college and church. “

West also expressed that the support from the Alabama-West Florida Conference is the equivalent of funding 60 United Methodist students this year to attend the college. Leeland was praised for his leadership in encouraging clergy and lay to help identify prospective students for Huntingdon College.

To further exemplify the partnership between the conference and college, the Huntingdon College Leadership Academy and the $600,000 grant through the Lilly endowment were praised.

Upon accepting the award, Leeland expressed his thanks and returned the appreciative words to West by describing him a “turnaround President.” He also noted that the college has become closer to the church. His brief words ended by him saying, “I’m just humbled.”

The student winner of this accolade, the Algernon Sydney Sullivan Award, is also given. Kristin Curtis was the recipient at college’s awards convocation, and was in attendance. She is a religion major and will be attending Candler School of Theology in the fall.

Click here to see the photo gallery from the event.
News