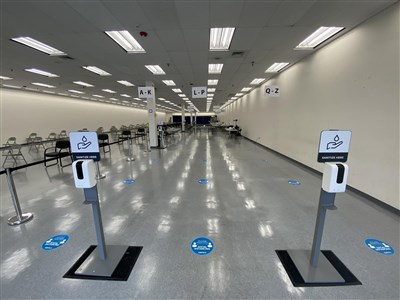 (Kari Barlow for AWFUMC) - In late January, Joe Davis, director of mission and outreach at Auburn UMC, got a request that was a little daunting.

UMC clergy member Laura Eason, who serves as the hospital chaplain for East Alabama Medical Center in Opelika, asked Davis to coordinate volunteers for a mass COVID-19 vaccination site that would open in the next few days.

“When I got that call from Laura, … I didn’t exactly know what I was saying yes to,” he said.

But he and Eason had been in tougher spots. In March 2019, the two joined forces with other local groups and agencies to minister to the Auburn-Opelika community after it was devastated by a series of deadly tornadoes.

And for Davis, the vaccination effort was an opportunity to finally make a difference in the face of the pandemic.

“We can watch the news and complain and worry, but this is something that will actually get us out of this darkness,” Davis said. “It’s just a tangible way to give people hope.”

To find the volunteers they needed, Auburn UMC drew on its church members and a host of other community partners including Lee County Emergency Management, the Opelika and Auburn chambers of commerce, the cities of Auburn and Opelika, Auburn-Opelika Tourism and the nursing schools at Tuskegee University, Southern Union State Community College and Auburn University.

“It came together as we kept planning,” Davis said. “It’s truly a community-wide effort.”

The EAMC’s Community Vaccine Clinic—located at an old Tuesday Morning store at 1716 Opelika Road being leased by the city of Auburn—opened on Feb. 1, serving residents of Lee, Macon and Chambers counties. In its first three weeks of operation, the clinic administered 10,206 first doses of vaccine, and today it is dispensing roughly 1,200 shots each day.

Through their efforts, Davis and Eason have recruited an estimated 700 volunteers—all of whom get to be vaccinated—to work at the clinic in three- to four-hour shifts, directing the public and answering questions.

Margaret Taunton, communications director for Auburn UMC, said the response to the call for volunteers has been overwhelming.

When Rev. Cory Smith, senior pastor at Auburn UMC, volunteered at the clinic, he found the experience uplifting, and some folks passing through the line even asked him to pray with them.

“It was definitely a community moment,” he said. “It’s a joy to be involved. It’s really serving as the hands and feet of God.”

Davis agreed, adding that it’s been exciting to see the site run smoothly.

“Being up close to it and seeing so many people I know and seeing how much of a relief is for them is powerful,” he said. “We’ve got a really good thing going!”
News