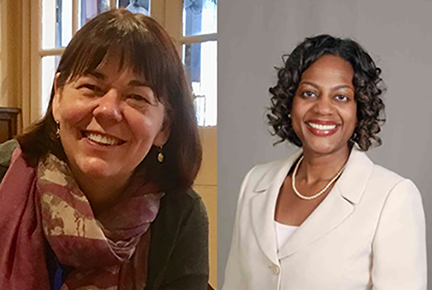 (Kari Barlow for the AWF Conference) - You could hear the excitement in Laurel Akin’s and Celeste Eubanks’ voices on Monday as they made their way to Columbus, Ohio, for the 2018 Assembly of United Methodist Women.

Not even the stress of multiple flight delays could dampen the spirits of the two women who are just days away from answering the call to serve as deaconesses in the United Methodist Church.

“It’s been such a faith walk,” Eubanks said in a phone interview from Charlotte Douglas International Airport. “I’ve seen God work in amazing ways. … I am living Jeremiah 29:11!”

Indeed, God’s plans for Eubanks, the director of leadership strategies for the Alabama-West Florida Conference, and Akin, a freelance photojournalist from Enterprise, are coming to fruition after years of prayer and study.

“I feel like I’m finally doing what God has called me to do,” said Akin, who was waiting with Eubanks at the same airport gate. “This is just another world opening up.”

Akin and Eubanks are among roughly two dozen other women to be consecrated as deaconesses at a special service Friday morning, which will be streamed live from the Greater Columbus Convention Center.

After their consecration, Akin and Eubanks will join two other women in the AWF Conference—Susan Hunt, director of mission and advocacy for the conference, and Clara Ester, who retired in 2006 as the executive director of the Dumas Wesley Community Center in Mobile—as deaconesses. Hunt and Ester were sources of faith and guidance to Akin and Eubanks, with Hunt leading a key discernment event they both attended in 2012 and with Ester encouraging Eubanks when she resisted the idea of being a deaconess.

“The call was definitely something I ran from,” Eubanks added. “She said, ‘Celeste, I see something in you. You have a heart for the people.”

Taking that advice to heart, she transitioned from a corporate job in the IT industry to full-time ministry and plans to concentrate on ways to help make the UMC more diverse and inclusive.

“It’s always been a passion of mine,” Eubanks said. “Heaven is going to be people from all walks of life. … And diversity is not just about race. It’s culture too. Even as Americans, we have cultural differences.”

Akin, who has worked closely with VISTA’s Communities of Transformation program in Dothan, plans to use her photojournalism skills to help nonprofits and churches fight poverty within the AWF Conference and beyond.

“I want to help people tell their stories,” said Akin, who got her first camera when she was in sixth grade. “I’ve always felt drawn to the marginalized. I want to educate people and shine a light on different issues.”

Akin and Eubanks say they are encouraged by the work God is doing through the UMW across the globe and are excited to be part of it.

“God sits on the throne,” Eubanks said. “Regardless of what man is doing, God is going to have his way.”

To view the consecration service at the 2018 UMW Assembly, go to unitedmethodistwomen.org/live
News