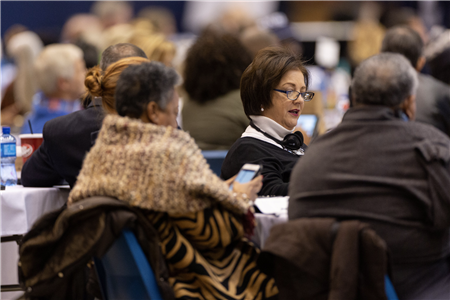 A Video Message from Bishop Graves

We invite you to watch a video message from Bishop David Graves related to the conclusion of General Conference. Click here to view. Click here to read transcript. You may also listen to this message as an audio-only podcast by clicking here, by searching for "AWFUMC Podcasts" on iTunes or in your preferred podcast player. We invite you to subscribe to these podcasts.

A Statement from the Alabama-West Florida Conference

The 2019 special-called session of General Conference has adjourned. Eight hundred and sixty-four delegates from around the world convened in St. Louis, MO, on February 23-26, 2019. The delegates examined paragraphs in the United Methodist Book of Discipline concerning human sexuality and considered different various legislative pieces related to that topic.

In the legislative committee, several petitions passed, including the Traditional Plan. The One Church Plan did not pass. The Traditional Plan was passed in the plenary session but yesterday, several components of the Traditional Plan were ruled unconstitutional by the Judicial Council. The plan, as a whole, will be referred to Judicial Council again for review. Any components of The Traditional Plan deemed constitutional by The Judicial Council will take effect in January of 2020. We are, therefore, still under the guidance of the 2016 Book of Discipline.
General Conference is the top policy-making body of The United Methodist Church and is the only voting body who can speak for the denomination. The next session will be held May 5-15, 2020. Ten delegates, half clergy and half laity, represented the Alabama-West Florida Conference at this gathering.

-The Alabama-West Florida Conference of the United Methodist Church

Morning Worship: The offering in morning worship was for UMCOR, which consistently continues to assist the Alabama-West Florida Conference after Hurricane Michael. We are grateful for their partnership.

Plenary Session: Today's work includes petitions that were passed in yesterday's session and the One Church Plan minority report. Complete details of amendments from yesterday may be found in today's DCA. Complete details on the plenary session will be available in the final DCA.

Minority Report, One Church Plan:
The minority report has parliamentary priority and therefore was discussed next. Bishop Gregory Palmer, the presiding bishop, heard three speeches for and three against before a prayer was offered. The motion to substitute failed 374 to 449 and thus failed.

Referral to Judicial Council: A motion was made to refer the Traditional Plan to the Judicial Council for a declaratory decision: It required a 20% vote and passed with a count of 405 to 395.

AWF Spiritual Directors: The Alabama-West Florida Spiritual Directors are available to anyone in our conference who would like prayer in the coming days. Click here and Rev. Ashley Davis, AWF Director of Connectional Ministries, will coordinate your request.

Bishop David Graves , the delegation and AWF conference leadership are inviting all clergy and laity to join them for an overview of the called session and a question and answer time. The dates and locations are below. Registration is not required for the meetings except for the two clergy gatherings.

Social Media: Follow the action on social media through these channels.