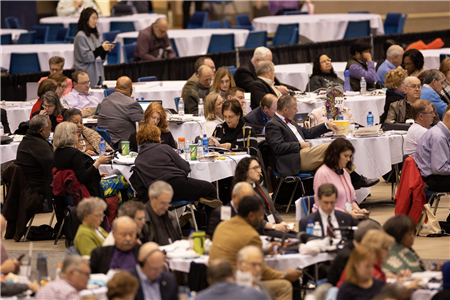 "Many wondered if we could address all of the petitions in one legislative day but today we were able to accomplish that. The delegates are very focused on the petitions and the votes consistently exemplify that. Thus far, the legislative committee has passed two petitions related to pension issues as well as two exit plans in addition to the traditional plan. This only moves these petitions to the plenary tomorrow where nothing is finalized until the votes are completed. There have been emotional moments, but I am proud of our delegation and how they have kept their composure. Tomorrow is a new day. Thank you to everyone who has been praying for all of us. We have felt your prayers."
-Dr. Steve Furr, Head of Delegation (laity)

Legislative Committee Work: The delegates continued their work of reviewing petitions, which were prioritized in yesterday's session. Complete details of amendments may be found in tomorrow's DCA and will be added on this link.

Approved Motions
A motion was approved to reject the remaining petitions except the Simple Plan. The vote count was 476 to 347. A motion was rejected to exclude the Connectional Conference Plan from the rejected petitions. The vote count was 272 to 519. The original motion to reject the remaining petitions (amended) was approved 734 to 64. A move to request a declaratory decision from the Judicial Council was made for a ruling on all petitions passed today, in the order they were passed. The required one-fifth vote was present with a count of 437 to 371.

AWF Spiritual Directors: The Alabama-West Florida Spiritual Directors are available to anyone in our conference who would like prayer in the coming days. Click here and Rev. Ashley Davis, AWF Director of Connectional Ministries, will coordinate your request.

Search for legislation submitted by petition number, keyword or submitter. As General Conference progresses, the information will be updated regarding the actions taken on each piece of legislation. Legislative tracking here.

Social Media: Follow the action on social media through these channels.