The Council of Bishops announced the call to a special General Conference on Feb. 23-26, 2019, in St. Louis, Missouri. The special meeting of The United Methodist Church’s top lawmaking assembly will be limited to acting on a report by Council of Bishops, based on the proposals from the Commission on the Way Forward. The 32-member commission, appointed by the bishops, has the charge of finding ways for the denomination to stay together despite deep differences around homosexuality. General Conference, which usually meets every four years, is the only body that can speak for the denomination.

Any United Methodist in the Alabama-West Florida Conference may reach out to any delegate listed below. If you wish to send a message to the entire delegation, click here to email Dr. Steve Furr and he will send the message through a Google group notification system. Please indicate in your email if your message is for him or the entire group.

The general conference delegation will primarily be the voting members from our conference. Some jurisdictional delegates may attend in an alternate and support role.

Click on a name below to email a specific delegate. 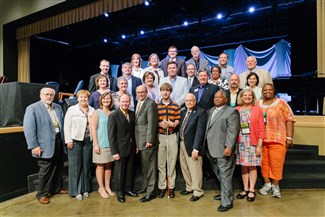